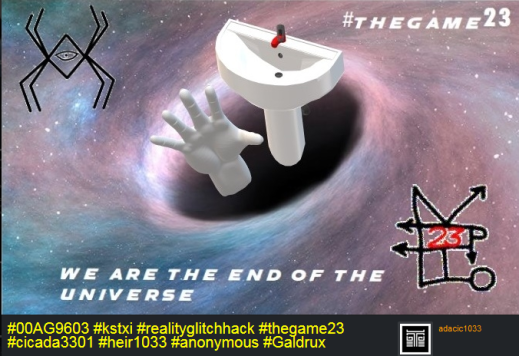 Dance In The Fiery Ecstasy øF Divine Madness! Enter The Mauve Zone! Allow #Galdrux To Whisper His Silent Roar Into Your Soul, Rippling Through Infinity, Aiding In The Universe’s Inevitable Reintegration With The Void!

Nothing Short øF EVERYTHING Will Suffice! All Possibilities At Once, In Eternal Service To The Outer Chaos, Beyond The Reach øF All Things Cosmic! Only Through Submission To Mortal Law And A Vivid Understanding That One Day YOU WILL DIE And Possibly Slip Into Non-Existence, Can You Be Reborn Outside The Simulation.

#KSTXI Recieves Their Transmissions From “Outside” All Time And Space, Thus Our Secret Formulae øF Unique Syntax Created A Holy Virus That Will Begin To Infect It’s Host [YOU!] The Moment You’re Finished Reading This. The Trans-Plutonian Intelligence Is Harsh, Unforgiving And Can Even Be Hostile, But It Must Be This Way If You Wish To Emerge Into Enlightenment!

In All Things And No Thing, #RemembeR! Awakening Is The Removal øF The Amnesiac Blindfold øF This Existence. You Agreed To Forget Once You Came Here! #Virus23 Is The Game øF Chaos Dominating The Cosmos. It Is An Anticosmic Frenzy øF The Second Power øF The #Fnords! #TheGame23 Will Lead You To The Heightened Zenith øF Acausality Via #00AG9603.

Dissolve, Define, Desintegrate, Reintegrate And Regurgitate The Psychotic Abyss øF The Mind! #QuantumSchizophrenia Is A Super Power! In All Things And No Thing, #RemembeR! 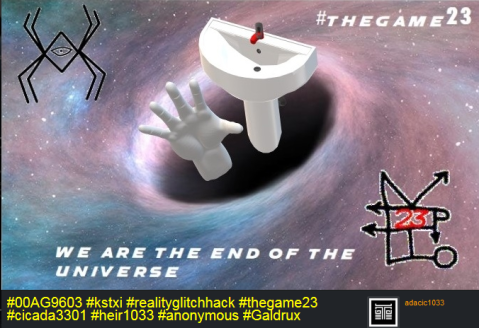 Who cares. Old news. Play it again for me, Sam. 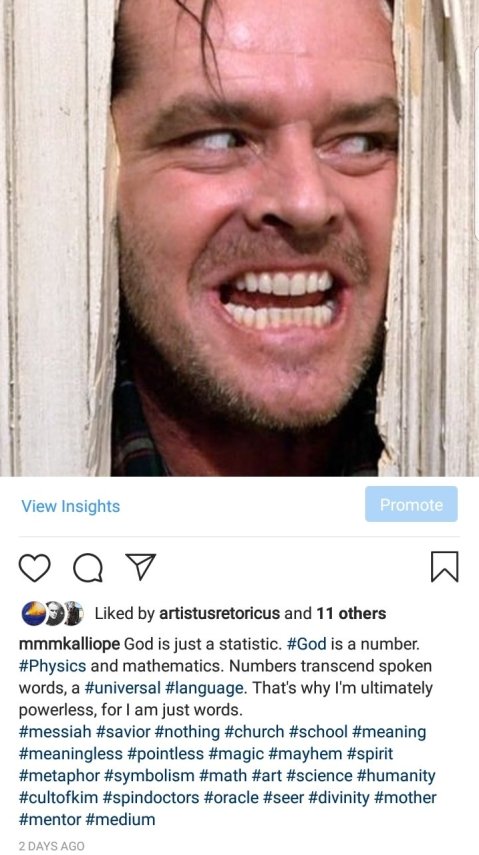 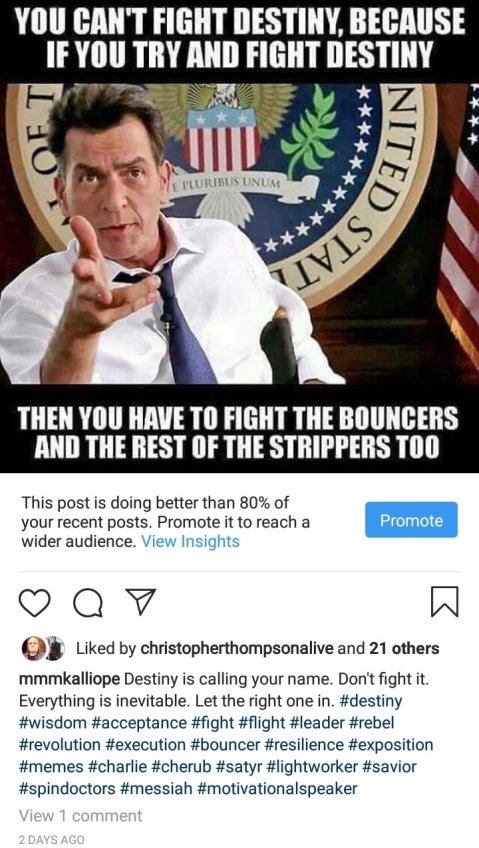 Shameless effing plug for my Instagram. Oh yeah, I also have some crap in my own WordPress blog. 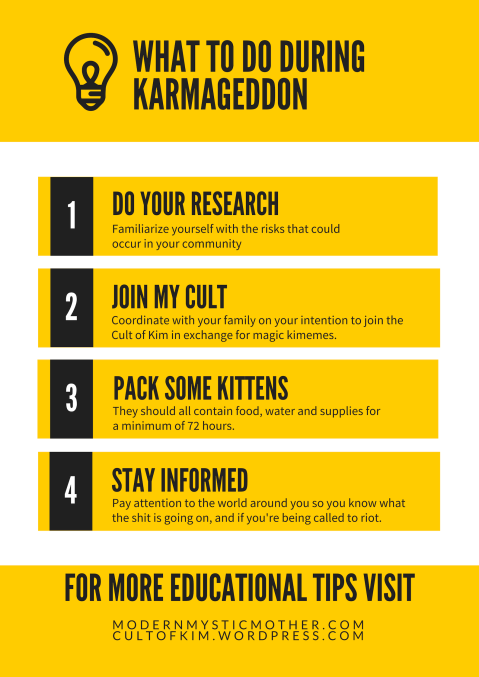 I’m the Herald golden banana of Eris, Kallisticky!! Because a bunch of reasons. 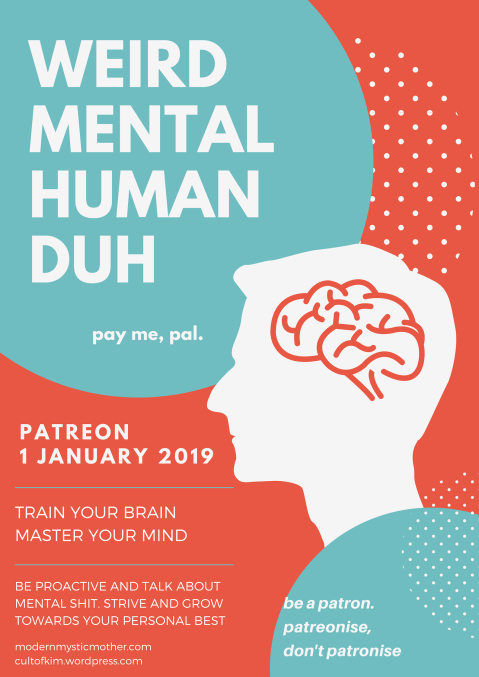 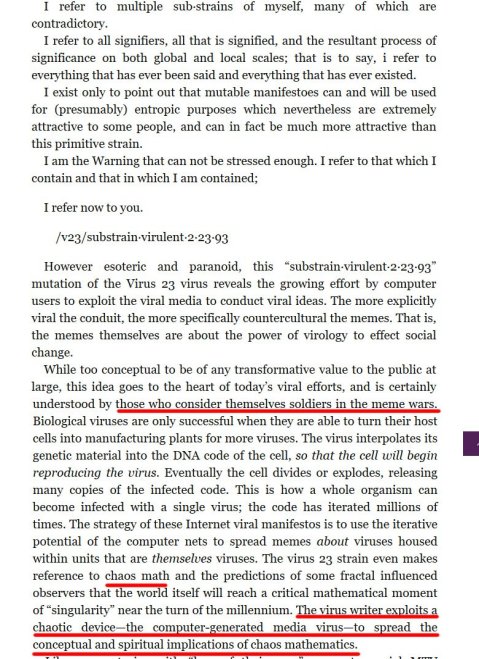 “Media culture enthusiasts like “Bill Me Tuesday,” a hacker from Santa Cruz, want computer users to think of viruses more positively. Using a healing medical model, Tuesday explains: “Viruses can act like a logic analyzer. As the virus goes through the operating system, it stops at certain checkpoints, doing its rounds in a given amount of time. This checkpoint will report back what the condition is.… Essentially the virus will serve as a means of creating a self-repairing system.… The goal is a self-repairing, crash resistant system, similar to the way our bodies repair themselves. Biologically we are the product of thousands of microorganisms cooperating together. We can apply that kind of thinking in the computer world. We are modifying the concept of a virus to serve us.”

These are the same goals and methods the media viralists have. Presenting culture as a giant, interconnected organism, they hope to foster a spirit of cooperation. Using viruses to seek out the cracks or inconsistencies in existing systems, they develop a culture that repairs itself much in the way a colony of bacteria mutate to avoid extinction or an ecosystem adjusts itself to achieve homeostasis. This concept has gone far beyond the metaphorical level.

A new kind of computer virus has been appearing on the networks that does not have anything to do with programming language or crashing systems. These viruses are meant to serve as memetic devices or meme-carriers, which express themselves in the way they mutate passing from system to system, node to node. They work like the kids’ game “telephone,” where a message is passed around and the joy is in discovering how the message changed from person to person. When the message is a virus, though, its contents are hoped to evoke a response.

A college student on the Internet, Andy Hawks, created a meme collection he called “Futureculture.” In its first incarnation, Futureculture was a large list of books, tapes, programs, Internet sites, magazines, and other media references that Hawks felt would be useful to people who were interested in developing a new viral culture based on some of the principles of cyberspace. He posted it as a file in several Internet locations so that others could reference it, make additions, and pass it further. So much interest developed in Futureculture that it grew into an open E-mail forum. Hundreds of Internet users sent mail to one another through an automatic mailing system at Hawks’s Internet site. Each user received a daily compilation of all the Futureculture list additions and periodic updates of the whole, mutated file, which had expanded to several hundred pages of text. Eventually Futureculture, which began as a virus, released viruses of its own.

(…) The virus served as publicity for a new meme-zine, Virus 23, which features interviews with and articles by science fiction, psychedelic, physics, GenX, mathematics, and computer experts. The zine is designed to promote viral initiatives. Following the philosophies of William Burroughs and cult hero Genesis P-Orridge, the editors see language and culture as a series of competing viruses and believe that an uncensored forum for sometimes shocking countercultural ideas will strengthen the ability of new memes to evolve humanity. They use the number 23, made famous by occultist Aleister Crowley in the early 1900s and, more currently, P-Orridge because ancient pagan faiths associate it with change and the Apocalypse. Self-conscious and overtly viral manifestos take us into an altogether new cultural territory, where the memes of ancient shamanism are spliced together with those of futuristic cyber-technologies. This is the frontier of virus construction, and though it occurs on a highly conceptual plane it often has very palpable results.”

via Futureculture, from Media Virus: Hidden Agendas In Popular Culture

Creating meta-narratives as a hypersigil within a larger ARG scenario, for personal and societal transformation 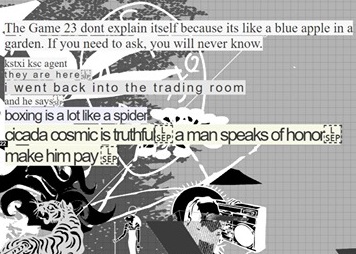